Woodruff to compete in cyclocross nationals

Woodruff to compete in cyclocross nationals

Sarah MuenchJanuary 7, 2015
CyclocrossPremium News0 Comments0 views
Chloe Woodruff (Team Stan’s No Tubes) is headed to back to USA Cycling Cyclocross National Championships where she will compete on Sunday against 55 other pro women for the top national spot.

Woodruff used the pro men’s Arizona state cyclocross championship as her “warm up” for nationals and landed fourth on the podium in that race.

“Cross is a really fun, often ridiculous, sport, and I find it suits my strengths on the bike pretty well,” Woodruff said.

Woodruff is hoping for redemption after last year’s national cross championship. In that race in Colorado, she crashed and injured her thumb but still managed to finish ninth out of a field of 111 riders.

We asked Woodruff about the upcoming championship in Austin, Texas:

CI: It looks like you’ve been out and about recently at some national CX races, and you’ve had some success over the summer with a podium spot at cross-country mountain bike nationals, not to mention going to several world-cup races.

CW: Stan’s NoTubes gave me the opportunity to race a modified cross schedule this fall, and I decided to give it a go after the mountain bike season. If the fall rolls around and I’m still motivated to travel and race, then, why not? Cross is a really fun, often ridiculous, sport and I find it suits my strengths on the bike pretty well. But I’m still focused on the mountain bike, and this next year is a very important one for Rio 2016.

CW: There’s no ‘for sure’ until you’re actually going. But I’m giving it a shot, and the selection process lasts for some time. At the end of 2015, USA Cycling will select a “Long Team” for the Olympics which will consist of a handful of riders. From that group, one or two women will get to go.

CI: You went to CX nationals last year, crashed, injured your thumb, got up like a boss and still managed to finish ninth out of 111 riders. What are you looking to do at CX nationals in Austin this year?

CW: Yeah, that sounds familiar! That was such a fun weekend racing in my hometown of Boulder, Colo. and I actually crashed right in front of my sister, Shannon, who captured the moment on camera. I had one bike and one set of wheels that weekend so I kept my fingers crossed that the course would dry out for race day (which it did!). This year, I’m much better equipped with a second Ridley X-Fire, a great support crew from Stan’s NoTubes and Shimano disc brakes. I want to be in the race again, but this time to the finish.

CI: What and/or who do you think is going to be your biggest challenge in Austin?

CW: Well, that’s an easy one! I’m usually my biggest challenge. I’m human, and I make mistakes. I’ve also been a little nervous over that limestone staircase. I thought it was a joke the first time someone mentioned it’d be a part of the course…

CI: What kinds of advantages/disadvantages do you think the location and course will provide vs. last year in Colorado? 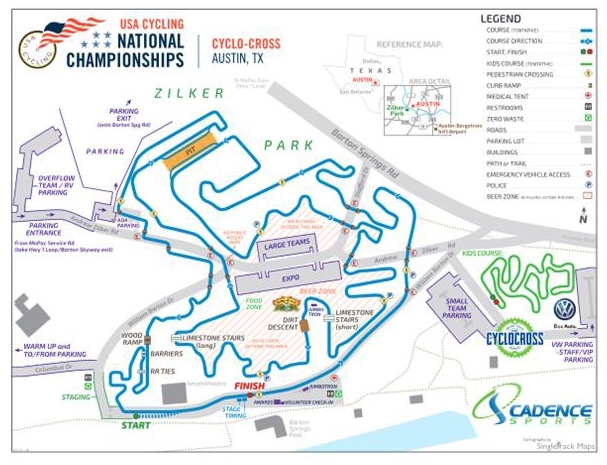 CW: The biggest disadvantage versus last year is that I won’t have my parents and sister running around the course in Austin, Texas. That was pretty awesome last year. But this year I have disc brakes!

CI: What are some of your likes/dislikes about CX racing as compared to MTB racing?

CW: A cyclocross race is typically very dynamic and tactical which makes it really exciting to race in my book. My husband and I have been watching the #LikeAVos and #Sveness videos by CXHairs this year, and it’s a great way to develop an appreciation for the sport. Pure cyclocross racers are tough too. I’m really not sure how to cope with racing in the winter (like Jingle Cross) and I’m a klutz on my feet.

CI: Looking ahead to 2015, what are your overall race plans?

CW: I’m racing a full World Cup schedule and focusing on the U.S. Cup races on the domestic side. In Arizona, I’ll race the Epic Rides events, a few MBAAs and possibly the Chino Grinder.

CI: What setup are you going to be racing with at CX nationals?

Follow Woodruff during all the action at CX nationals on Twitter: @ChloeWoodruff or on her blog at chloewoodruff.com.