A good day: Go inside Marana Crit with EGO 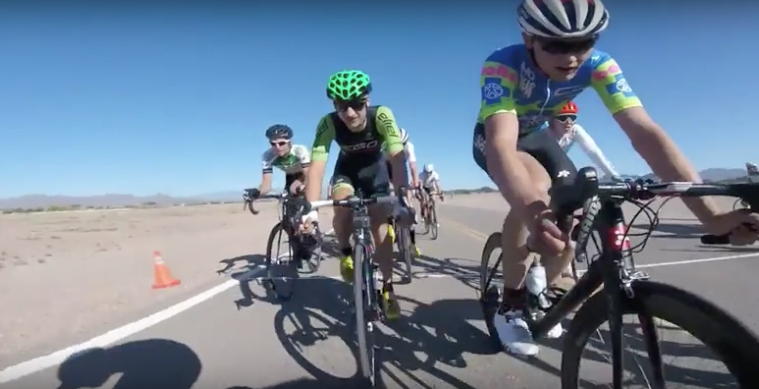 A good day: Go inside Marana Crit with EGO

Resident Arizona snowbirds EGO p/b Sammy’s Bikes landed on the top step of the podium in the Marana Heritage Crit on Saturday after drilling through a nasty head wind to the finish.

Michael “Ducky” Dutczack, not to be confused with Landis/Trek’s Michael Dziedzic, took the win for the team that has been livening up Arizona races all season long.

“The race was hard, often strung out in the crosswind, but drafting in the headwind allowed some recovery each lap,” said team member Axel Voitik on the EGO website. “I struggled at times to stick with the group and quickly decided I only had one real effort in me that day. Ducky and Ricky both said they were feeling flat as well, so it was no surprise that we didn’t end up in a breakaway.”

The team missed the defining late move of the race from El Grupo’s Tyler Stites, who went solo for 15 minutes and gained a 25-second advantage, Voitik said.

“With one lap to go he had about 13 seconds, but Landis chased, and we lined up behind to wait for the final kilometer,” Voitik said.

Find out more in the team’s race report.

What’s next for EGO

EGO will leave Tucson for the San Dimas stage race in California this weekend. From there, they’ll stay at altitude in Colorado until the Joe Martin stage race in Arkansas before heading back to Colorado.

Clipped In plans to have more coverage from the team over the summer as they head back to Chicago and compete at Tour of America’s Dairyland – an 11-day crit series in Milwaukee, Wis. – and the Intelligentsia Cup in Chicago.