The women covered nine laps of the 7.9-mile course for a total of 70.4 miles, punctuated by a steep climb on Sherrod Road with a maximum gradient of 14 percent. Sweltering summer temperatures and high humidity added an extra challenge for all riders.

Winder put in a gutsy attack on the penultimate lap to drop all competitors and continued solo to the finish line. She held off a charging small group of riders to claim her first pro road race title. Last year Winder rode for Team Sunweb and helped teammate Coryn Rivera (Team Sunweb) win the title; she finished 10th overall.

“It’s not over ‘til it’s over, just keep on going, that’s all I was thinking,” Winder said. “Just trying to motivate myself to go as hard as I could. I thought everyone was going to pass me in the last 100 meters; I had nothing. I sat down, and I was like ‘get up, sprint, sprint, sprint’. Nobody passed me and I can’t believe that I won.”

Winder finished in a time of 3 hours, 17 minutes, 41 seconds, which was only one second ahead of defending champion and now former teammate Rivera.

“My first [National Championship win] as an elite; It feels awesome,” said Winder, whose best finish previously in the pro road race was third in 2017. 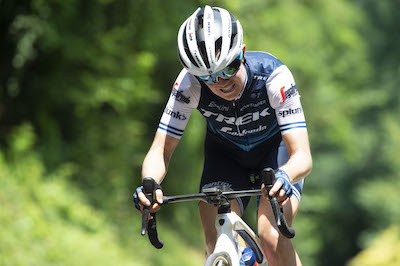 “Knoxville I think has been one of my favorite places in the United States to race. It’s amazing,” said White, who also won this year’s Elite and U23 Criterium titles on Friday. “All the people that come out, they are all over it, in the roads. I am a personal huge fan of country music, so I feel right at home. Everybody is so nice and kind here. The racing is awesome, the courses are super fantastic. I think it gets better every single year.”

The pair pushed the gap to over four minutes before being reeled in six laps later. Winder’s Trek-Segafredo teammate Tayler Wiles put in a massive attack on the climb to thin out the field before Winder made her move after the feed zone.

Lily Williams (Hagens Berman – Supermint) was the only rider to stay with Winder, but was dropped the next time up the climb.

“I was in tears,” said an emotional Howes, who finished second in 2016 and seventh in 2017. “I’ve been running after this one for a while, eight years or so. So, I’ve been on the podium a few times and always an animator, just never there. Today we went early and just kept going. I can’t believe it paid off.”

The group gained a maximum of two minutes on the 60-rider field before getting reeled back 10 laps later.

After multiple counter attacks and surges from the peloton, the winning break was initiated by Bassett, who emerged on the decisive climb up Sherrod Road with three laps of racing to go. From there, the battle was on between the break and the chase group.

“The first couple of years it was actually stressful. You get used to it, but you use it to focus on the task at hand. It’s definitely a good motivator,” Bassett said about racing U.S. Pro Road Championships in his hometown for a third year.

It came down to the final three riders who escaped in the latter part of the race, and gained a maximum of 50 seconds over a select chasing group. The break took turns attacking each other, until Howes was able to come around Bassett after the left turn onto Clinch Avenue and score the win on South Gay Street.

“Neilson Powless is probably one of the best guys in the states right now,” Howes said. “This isn’t necessarily his course. Stephen Bassett, hometown hero out there, was unbelievably strong and riding with a full heart. He was hard to get around. I just timed it right as it flattened out (at the finish) and hit him (Bassett) with some speed.”

The championship by Howes was the first time a WorldTour rider had won the Stars-and-Stripes jersey since Timmy Duggan took the win in 2012 for Liquigas-Cannondale.