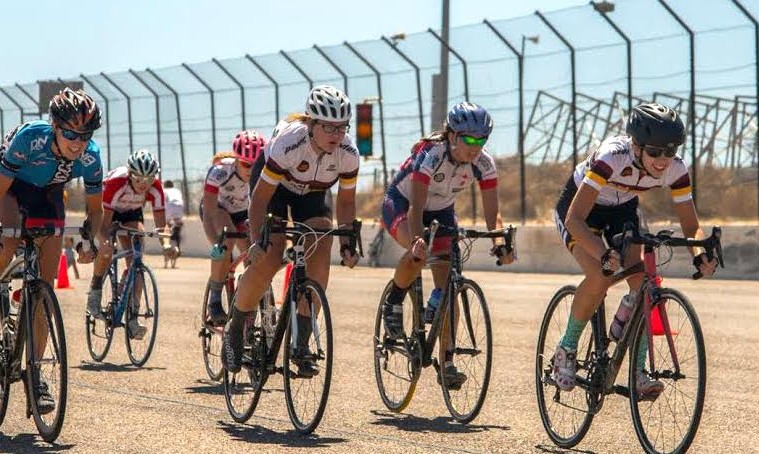 Southwest collegiate racers headed back to New Mexico last weekend for an omnium race in Albuquerque at the 2016 Adoption Exchange Classic, where University of Arizona maintained its lead over Arizona State University, creating a deficit that will be hard to overtake.

Conference leaders David Greif (UA) and Shelby Hoglund (UA) also held onto their conference-leader jerseys after a team time trial, criterium and windy road race on one of the toughest road race courses between New Mexico and Arizona.

With only two collegiate conference race weekends left, the Sun Devils face a difficult task in pulling back the team omnium, which is riding away from them by 98 points. Greif also has a significant lead in the individual men’s omnium with a 100-point advantage over his own teammate Josh Pratt-Ferguson, who only is only 16 points up on ASU’s Constantin Schreiber.

“If we show up in force and produce some good individual performances anything is possible with double points for conference championships, but all three conference titles are definitely UA’s to lose this late in the season,” Schreiber said.

Sun Devils were able to post one big victory – the Men’s A team stuck a pitchfork in the Wildcats’ time trial team on Day 1 at near freezing temperatures with a time of 27:35 compared to UA’s 28:12.

“We had a great upset win in the men’s TTT – the last time we beat them coincidentally was exactly a year ago in Albuquerque when they were riding with only three riders,” Schreiber said. “While we will bask in the glory of that win for a while I have a feeling that this was just what UA needed in terms of an eye opener and motivator for the conference championships and nationals.”

Schreiber said UA has the power for a top-10 finish at nationals.

“Our win could only be achieved with perfect teamwork: smooth pacing, communication and total dedication to the team effort by all four riders,” Schreiber said. “Or maybe those skinny UA kids didn’t like the cold weather.”

UA fought back to take the TTT win in Women’s A and Men’s B and C, followed by ASU in each category. University of New Mexico took third in both Men’s and Women’s A.

As temperatures warmed, racers headed to the criterium the same day at a car racing track with banked corners just outside of Albuquerque.

“Without the loud sound of Muench’s carbon wheels behind me, I can hear my own thoughts in a crit,” said Hoglund, who lost the conference championship last year to ASU’s Sarah Muench in Albuquerque.

Brooke Lyman (ASU) and Katie Emory (UA) made up the Women’s B podium, with Zach Morrison (NAU), Orion Staples (UNM) and Gabriel Perez (ASU) on the Men’s B side.

Up hill, into the wind

The winds picked up quickly Sunday morning as riders rolled onto the looped course of the road race.

Racing with the Pro/1/2/3 field, Greif (UA) attacked within the first few miles, sustaining his break for nearly ¾ of a 42-mile lap, but was caught and brought back into the main pack, where he worked to lead out Pratt-Ferguson (UA) on the final hill, securing first and second place, followed by Schreiber (ASU).

The Women’s A field stayed together until Hoglund (UA) and Cherry Niel (UA) broke away on the grueling 18-percent grade of “Heartbreak Hill,” only seven miles into the course. They sustained their break for the rest of the race and went 1-2, with Tininenko (UNM) sprinting out of the pack finish for third.

“I have never taken the leader’s jersey seriously because when looking forward to a season, too many things can happen that can be let downs,” Hoglund said. “This year there are new A riders on my team so we can actually have plan of action in our races. I feel confident that if all goes normal in the next two weekends, I will finish with the jersey.”

With only two race weekends left – ASU Crit #2 and conference championships in Duncan – Southwest collegiate riders will soon be gearing up for Collegiate Road Nationals in Marshall and Burnsville, N.C.

Photo by Carl Patterson-Markowitz: Women’s A racers sprint for a prime during the Adoption Exchange Criterium.