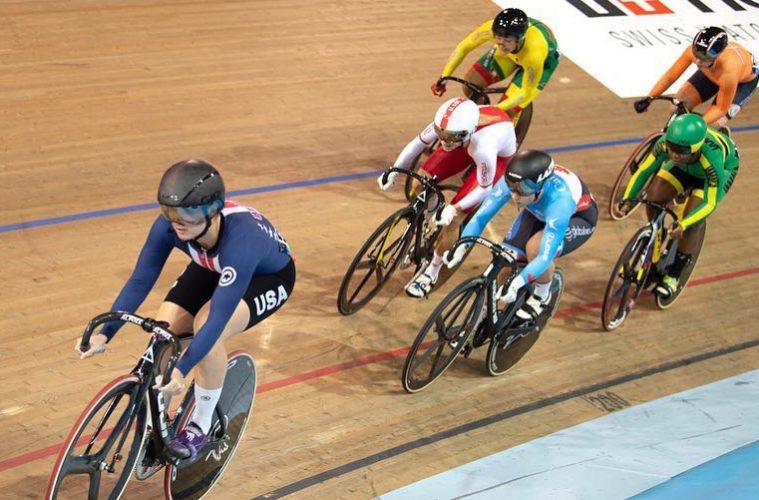 Starting off the weekend on the endurance side with the Men’s Team Pursuit, the combination of Lambie, Summerhill, Young and Hoover became the first American team to ride under the four-minute mark at sea level.

The quartet posted the fourth place qualifying time of 3:59.469.

Other U.S. men have raced faster but only at altitude. The U.S. men’s national record in the team pursuit is 3:53.868, set in August 2018 at the Pan American Championships in Aguascaliantes, Mexico, at an elevation of over 9,000 feet. With such thin air, Aguascalientes is one of the fastest velodromes in the world.

In the opening round in Cambridge, the U.S. men faced off against hosts and top qualifiers New Zealand (3:55.004).

The Americans settled for fourth place; Lambie, Young, Hoover, and long time United Healthcare Pro Cycling veteran Hegyvary, finished in 4:00.320, while Switzerland rode a 3:55.204 for bronze. The New Zealand team would continue their dominating performances at home and finish with a 3:50.159, the second fastest time in history.

“It’s a big relief,” Lambie said about achieving sub-4 minutes at sea level. “Everyone knows [Aguascalientes, Mexico] is a quick track, and after our lackluster ride in Milton [Ontario], it was great to see the team pull together. It’s always hard to lose in the final, but Switzerland had an amazing ride, and fourth is a lot better than 12th.”

The U.S. women started their sprint campaign off Friday in the team sprint with duo Marquardt and Godby. The pair finished with a time of 34.697, with a disappointing 15th place finish.

But the two bounced back the next day to post their best flying 200m time trial results of this World Cup season, of 10.984 and 11.215 respectively. With Godby’s 10.984, she became the first American woman to dip under 11.0 seconds in the flying 200m at sea level. Her American record is 10.55 seconds, set this past August at the Pan American Championships in Aguascalientes, Mexico.

Both Godby and Marquardt advanced deep into the match sprint bracket, with Godby earning an automatic bye to the 1/8th finals, and Marquardt easily beating her Canadian opponent in the 1/16th round to advance.

In the 1/8th finals, Marquardt lost a by fraction of a tire width to the third fastest qualifier and eventual silver medalist Olena Starikova from the Ukraine. Godby bested her 1/8th finals opponent, Spanish Olympian Tania Calvo, to advance to the quarterfinals.

Pictured above is Godby’s keirin win in Milton, ON.

In the second round, Godby finished fifth in her heat and would have to settle for a minor final ride. There, she pushed Hansen all the way to the line and wound up second in the heat and eighth overall.

Hegyvary, Holloway better together than apart

However, the pair combined in the Madison on the Sunday and rode their way on to the podium for a third place finish, equaling their podium spot earlier in the season in Milton, Ontario. The Madison for both men and women will be an Olympic event in Tokyo, and the U.S. is keen to qualify and has hopes of medaling on both sides of the event.

Hong Kong, Pruszkow and beyond

The U.S. team is en route to the final World Cup stop in Hong Kong, Jan. 25-27. Then it will be back to the U.S. for team camp with their sites set on the 2019 U.C.I. Track Cycling World Championships in Pruszkow, Poland.

Coupled with the dominant U.S. women’s endurance track program, the 2019 World Championships could be the best in recent memory for the U.S.A.