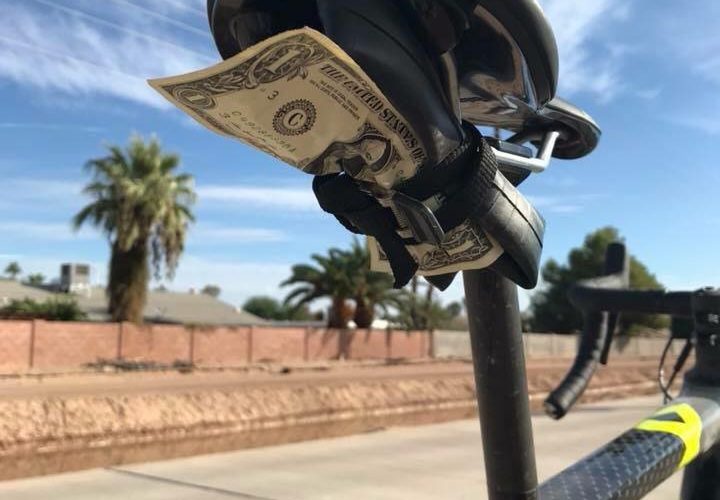 With each pedal stroke, you think about him and what happened. You oscillate between sadness and anger about as fast as you switch gears. You think about how often you ride up and down South Mountain and how it could have been anyone, even you.

But it was Rob Dollar.

He was money on the bike – living life to the fullest, taking on every challenge, giving it full gas – the kind of highly contagious attitude that picks you up because it makes him soar.

A Sunday ride at SoMo

The park is a favorite training location for Valley bike racers and cyclists, with nearly a 7.5-mile climb, some double-digit gradients and beautiful desert scenery along a winding road. There, the ATM ride breaks up and some riders continue on to climb to the top.

Dollar, 36, cranked to the top of a ride he completed often, a ride he loved, according to friends. He and a fellow rider reached the Towers, the highest point on the ride.

He descended to return home, taking familiar turns on arguably the most fun part of the route. At about 9:40 a.m. at about a 3/4 of a mile up the mountain from the “Y,” a location where the road splits to go to the Towers, a suspected drunken and high driver who was making her way up the mountain overtook another cyclist and fatally struck Dollar head-on.

After Dollar received CPR, he was pronounced dead at the scene.

Police arrested the driver, Annaleah Dominguez, 19, on suspicion of manslaughter and drug charges. Police said Dominguez showed signs of impairment and admitted to drinking alcohol and ingesting marijuana. Police also found marijuana on the ground that had been thrown out of the vehicle after the crash, they said.

Dominguez made an initial court appearance (below video), and is set for a status conference on Monday at 8:30 a.m. in Maricopa County Superior Court.

Some cyclists are planning to attend the court hearing to show support for Dollar. More information is on a Facebook event post.

Dollar, who worked in real estate, hailed from the Phoenix area and graduated from Corona del Sol high school. He moved to California for a short two-year stint around 2014, where he became more involved in riding and racing bikes.

There, he began attending group rides. He acquired the nickname RMFD, or “Rob Motherf*ckin’ Dollar.” He joined the Big Orange Cycling, and stayed on the team even after moving back to Phoenix.

“The guy was a densely packed ball of fire and good vibes,” said southern-California bike racer Seth Davidson in a blog post in the days after Dollar’s death.

He described his first meeting with Dollar: “He was new to cycling, but a veteran at life,” Davidson said. “I could tell that his brand of full-gas and crazy was going to fit right in.”

Davidson said when Dollar returned to Phoenix, he “joyously greeted his teammates and SoCal friends when they came to Arizona for the Valley of the Sun Stage Race.”

“Rob flew the Big Orange flag as proudly, or more proudly, than he had in Los Angeles,” Davidson wrote. “He stayed in touch with his SoCal friends, rode with them when they visited Arizona, and was never the one who let the relationship go flat. And Rob got better as a racer, too, even as he made the same impact on his hometown that he’d made on his adopted one.”

In Arizona, Dollar raced Cat 3 in road and raced some mountain bike races as well. He made an impact in close-knit cycling circles in Arizona. In addition to cycling friends, race buddies and rivals, he encouraged members of the ASU Cycling team in their training.

“We became friends right away,” said Osama Wali (Santini & ASU Cycling) in a Facebook post. “Your enthusiasm and outlook on life were contagious, and you ‘cursed like a sailor’ as one of our friends put it. You always made it seem like we didn’t ride hard or fast enough, and you were, of course, always right.”

Wali said Dollar would say: “We need to train more. How many miles do you have so far this week? It’s not that cold outside, even when it’s 40 degrees, all you need is a base layer and arm warmers. We need to crush those guys. You only signed up for two races today? You’re young, you should be riding twice as much.”

“We trained together even though I was a Cat  5 and you were a Cat 3, so it was more like I trained by trying to keep up with you on group rides,” Wali wrote. “I remember you were more excited than everyone else when I told you that I had upgraded to Cat 4.”

Tori Riemersma (Landis/Trek & ASU Cycling) said she and Dollar rode together a few times a week.

“He was the guy knocking on my door at 5 a.m. on Saturdays to drag me out to BOS/Bicycle Ranch/West Valley Cycle [group rides],” she said. “Honestly [he was] a huge reason I rode so much this summer. He was 100 percent a motivator, for everyone. It didn’t matter if it was the first time he rode with you, if you were in his vicinity he’d be working with you and yelling at you to not lose that wheel.”

Although Riemersma said she was having a tough time grappling with his death, she said it is “really comforting seeing how much support and love there is in the community right now.”

Erin Morley (The Velo) said the reason so many people are posting tributes to Dollar on social media tells it all.

“Even if you didn’t know him, you knew who he was,” Morley said. “He made his presence known, always. He was loud, brash, confident, hilarious, incredibly positive and wanting to pass that on to every rider around him. He’d smash the A group to bits, or ride and encourage the C group. Just one of those humans that you wanted to be friends with. I will miss his voice and smile.”

Stephen C. Ibáñez (Athlete Octane Racing), said he was lucky to get to know Dollar as a brother and is still in shock.

“Rob lived life to its fullest, never shying away from a challenge,” he said. “He gave 150 percent even when goofing off.”

A memorial ride for Dollar is planned for Sunday, Nov. 5 from 8 to 11 a.m. starting at The Velo bicycle shop at 828 N. Second St. in Phoenix. More info can be found on this Facebook event page.

At least 322 people have RSVP’d for the ride.

Feel free to leave a comment below about how you remember Dollar.

Above: Tori Riemersma prepares her bike for Sunday’s memorial ride.


Above: Erin Morley sticks a dollar in his saddle bag to memorialize Rob Dollar, who he called “Dolla Bill.”

Osama Wali contributed to this story.