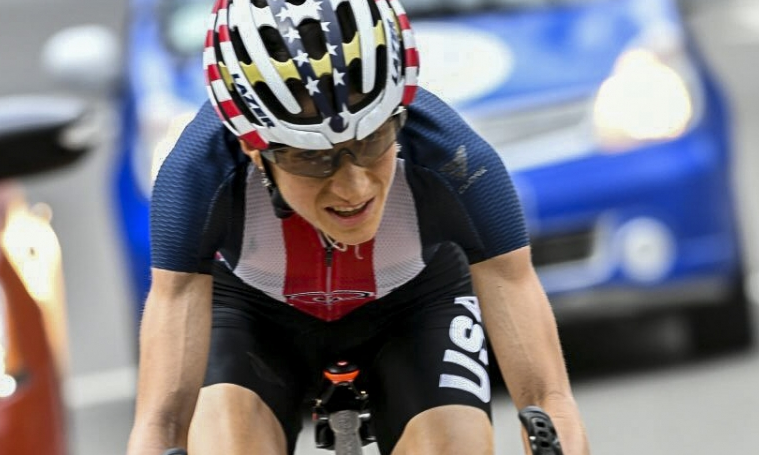 RIO DE JANEIRO – It was Mara Abbott’s race to lose.

The 30-year-old climbing ace from Boulder, Colo. had cards to play on the grueling climbs of the Olympics road race course Sunday in Rio.

But the flat roads were just too long for her to withstand a trio of chasers who bested her with 150m to go – a loss that left fans from Rio to the U.S. heartbroken.

The race was dramatic and grueling from the get-go with Abbott’s incredible finish set up over the course of the 136.9k by teammates Kristin Armstrong (Boise, Idaho), Evelyn Stevens (San Francisco, Calif.), and Megan Guarnier (Queensbury, N.Y.).

The grand finale began with about 20 k left when Abbott set the pace at the front of the peloton to catch a lead group. Then, on the long and difficult climb, Abbott joined Anna Van der Breggen (NED), Annamiek Van Vleuten (NED), and Elisa Longo Borghini (ITA) to create a powerful foursome. Van Vleuten picked up the pace, which would only be matched by Abbott, and the two of them reached the top of the climb together.

“On a climb like that, it’s a little bit of attrition. It was never an attack that broke the string. It was just one by one people dropping back,” Abbott explained.

The technical descent saw Vleuten gain about 30 seconds on Abbott who rode with a bit more caution on the damp downhill portion. The Dutchwoman looked to be in position for gold when she suffered a bad crash in a turn, leaving Abbott to complete the descent alone and power down the long and flat final kilometers to the finish.

Vleuten lay immobile on the side of the road as Abbott passed her.

“On the descent, I wasn’t comfortable holding her wheel and holding the pace that she was going so I just had to back off and go my own pace,” Abbott said.

Later the Dutch Olympic Committee confirmed Vleuten suffered three small fractures in her spine, a heavy concussion and she has to stay on the intensive care overnight.

It was a long, flat road to the Fort Copacabana finish line and Abbott dug deep to hold her lead over the chasers.

“I saw the 300 meter to go sign and I thought, Oh my goodness I could actually win this,” the American recalled. “And then I looked under my shoulder and they were right there and they passed me. But there was a split second that I thought it.”

After the race, Abbott focused on how proud she was to ride with her teammates.

“We had a really amazing team here and I think we were all really excited to ride together. I think a lot of credit has to go to Kristin Armstrong. She did a whole team’s work at the beginning of the race. She got herself in a break and helped me stay in good position. She was always there and was an incredible leader to us. Megan and Evie were right there with me the whole time. I admired them and the way they work as a team. I was really humble to be a part of that today.”

Megan Guarnier and Evelyn Stevens were 11th and 12th for the USA while Kristin Armstrong made the decision to pull out of the contest.

Armstrong explained afterwards that the plan going into the event was for her to pull out.

“It was only the second race I’ve pulled out of. I thought I was going to have a hard time deciding whether to pull out or not, but I gave everything and I didn’t have even a second I thought I could go any harder or any further. That, to an athlete, is a really good feeling, so I was just hoping and praying my teammate would make it to the line and win the gold,” Armstrong told reporters.

“Fourth is a wonderful position in the Olympics, but it’s also the hardest position,” Armstrong said. “You look at a rider like Mara Abbott, and this course is very special for her. Every four years there’s not a climb, and that’s Mara’s specialty. She fought really hard to be on the Olympic team and she made it. There isn’t one girl that didn’t give it everything. I felt like we gave everything for each other and I think we have to be proud of that.”

Armstrong and Stevens will compete in the women’s time trial on Wednesday. They’ll be joined by Americans Brent Bookwalter (Asheville, N.C.) and Taylor Phinney (Boulder, Colo.) for the men’s time trial.