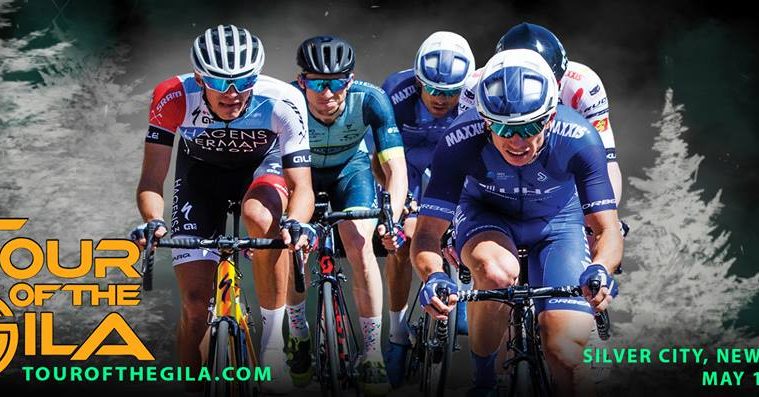 Top talent will rise to the occasion at Tour of the Gila May 1-5, and of all USA Cycling Pro Road Tour races, nothing is a tougher mountain to climb.

Now that teams have had a taste of 2019 PRT racing with two stage races and a crit behind them, they’ll send it with firepower, knowing this is a race for the elevation-gain inclined.

Strong U.S. squads will be met with tough international contingents; seven of 19 men’s teams are making the trek to Silver City, N.M., from Canada, Colombia, Mexico and South Africa. The 10 women’s teams will include a Mexico-based team and a Canadian selection team.

And although rosters can change up to 72 hours before the race, teams showing up for Tour of the Gila won’t hold back.

“What comes to my mind, when I think about this year’s field in both the UCI men’s race and the UCI women’s compared to previous years, is competitive balance,” said Jack Brennan, Tour of the Gila race director. “In the past few years, one UCI men’s team dominated as did one UCI women’s team. I don’t believe that will be the case this year. If I am right, we should see five days of very competitive racing.”

Here’s a list of confirmed teams (confirmed rosters will be made available on April 28):

Many teams target Tour of the Gila as a key race not only to win, but to assess team performance heading into the bulk of race season, and Rally UHC Cycling is no different.

“Gila is always a big target for our team,” said Zach Bell, director of the Rally UHC women’s team. “Not only is it a challenging and prestigious UCI race to win, it’s also a good indicator for us as to how form inside the team is coming along as we enter into the key part of our season.  We come to races to win races. Stages and GC. We won’t approach Gila any differently.”

Part of that plan likely will include former U.S. National Hill Climb Champion and Redlands stage winner Krista Doebel-Hickok, all-arounders Sara Bergen and Abby Mickey as well as the rest of a stacked Rally UHC squad.

“The competition has been exciting and come down to the last day again and again,” Bell said. “Gila is not anyone’s for the taking. It is always a race that has to be earned through consistency and strength day after day. We have several riders who could achieve that in our roster, and it will just come down to how we can control the momentum in the race to our advantage.”

“It is going to be really interesting to race against some of the strongest teams in America on these super hard courses,” Simone Boilard, a Canadian who is racing in her first season with the team. It will also be her first Tour of the Gila. “Sho-Air TWENTY20 is coming to this race in strength and excited to battle.”

And Hagens Berman | Supermint will bring their A-game to the long, hard stages around Silver City, they said.

“We haven’t historically had a pure climber on our roster, but we do with Aimee Vasse this year, so we’re excited to see what she can do on Mogollon and the Gila Monster,” Hagens Berman | Supermint’s Lindsay Goldman said. “We’ve also never met a crit day we didn’t like.”

“It for sure will be an exciting race again, and there will be action in each of the five stages,” Schwager said. “The ‘special fact’ with the Tour of the Gila is the racing at altitude. Plus, if there is very strong wind it can make for a different race as well. We had some wins/sucesses at Tour of the Gila before, so we certainly aim for some nice results in this years Tour of the Gila again.”

Durango-Specialized, based out of Durango, Mexico, said they will bring a young, but experienced team to Tour of the Gila, including the possibility of Jessica Parra, who hails from Colombia, and is the first foreigner in five years to join the team. She was on the podium for the Colombian national championship road race in February.

“Tour of the Gila is one of the most important competitions on our calendar,” said Siddharta Camil, the team’s director. “It’s an iconic an incredible race and we prepared really well for it. Our goals are to have someone in the top 10 in GC and have a good result in each stage. All of the teams that participate in Gila are strong, and they train their best to compete. The climbers are the most dangerous.”

Like the women, the competition in the men’s field is as steep as the Gila Monster.

DCBank Pro Cycling team will bring their strongest team to date to hunt for a stage win, according to Joyce Chiang, who manages logistics for the team. They’ll likely look to Gregory Daniel, a former U.S. Road Race National Champion and Tour of Utah KOM winner, as well as Frenchman Antoine Leplingard, both with enough in the tank for a GC win.

“Tour of the Gila is always a race we look forward to attending, Chiang said. “It is one of the most challenging early season races due to the altitude and challenging terrain. But, this is precisely why it makes it such a unique race and one that riders strive to win.”

The 303 Project team has been busy preparing for the altitude and courses by training at home in Colorado, said Nicholas Greef, the team’s owner/director.

“Climbing in the mountains is part of almost every ride we do,” Greef said. “We love to be in the mountains, and Tour of the Gila provides us with that opportunity. Gila has been the staple and benchmark for most of our riders for many years. It is our opportunity to do what we love most and to measure up against the best competition in the U.S.”

The 303 Project likely will bring an international contingent of their own with all-around stage racer Johann Van Zyl from South Africa; climber and Vuelta a Mexico stage winner Flavio de Luna from Mexico, who previously finished fourth on Tour of the Gila’s Gila Monster stage; and time trialist and Spaniard Bernat Font Mas.

Meanwhile, Gateway Devo Cycling will be looking for opportunities to showcase their riders’ talents in hopes to get them picked up by a professional team, said team owner Chris Creed. Gateway has had success in launching pro careers of eight riders in nine years of existence, he said.

“We are extremely excited for the 2019 Tour of the Gila, as we feel we are bringing possibly our best chances at overall success in years, with Sean Gardner and Conor Schunk,” Creed said. “We have them training at altitude right now in Durango, Colorado, in preparation for Gila, and we will bolster the roster in 100% support of Sean and Conor.  It is going to be a great race, and we cannot wait to get back to beautiful Silver City.”

With Matt Zimmer winning a stage and landing fourth overall at the Joe Martin Stage Race, Project Echelon Racing will also look to feature their climbing abilities. That could involve working for climber David Greif.

“Our sights are set on a top 10 in the overall classification and a top five stage result,” Greif said. “We have learned that anything is possible if you believe in it and share a common goal, so that is our approach going into every event.”

“Every race that Aevolo attends is a chance for these riders to develop race craft, execute a plan and demonstrate excellence at the front of the race,” Coulter said. “These opportunities are not endless.”