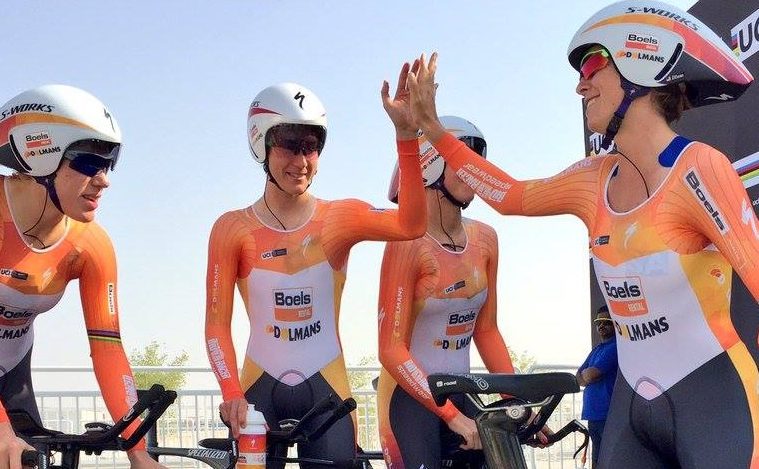 American Amber Neben helped BEPINK to fourth in the event with a 51:27.65, 2:46.03 off the winning pace, while American team TWENTY16-Ridebiker, led by Kristin Armstrong, Allie Dragoo, Chloe Dygert and Leah Thomas, finished fifth in 51:28.35.

Chad Haga rode for Team Giant-Alpecin, which finished seventh in 43:58.69.

Skylar Schneider (ISCorp Cycling p/b SmartChoice MRI) and Hannah Arensman (TWENTY16 Pro Cycling) narrowly missed the podium in the junior women’s TT, as Schneider clocked an 18:51.80 for fourth, followed immediately by Arensman with an 18:55.82 for fifth. The two Americans were less than 35 seconds off the winning pace of 18:21.77 set by Karlijn Swinkels (NED). Lisa Morzenti (ITA) and Juliette Labous (FRA) rounded out the podium in 18:29.12 and 18:43.12, respectively.