Peter Lasher and Kelley Matthews, the prospective developers of the “Bike Ranch,” withdrew their application for a conditional use permit from the Pima County Board of Supervisors. The withdrawal came in November after the national park announced its official opposition to the project.

Matthews said reapplying only will be successful if the park changes its position, but she and Lasher still remain advocates for their initiative.

“I hope we get to do it,” Matthews said. ”We keep thinking that there’s a lot of power in the idea, and that ultimately we’ll be allowed to prevail, but we have an enormous battle that we never anticipated.”

A resident of east Tucson for more than 30 years, Matthews said she and her husband, Lasher, had ridden their bikes past an open area by Escalante Road and Old Spanish Trail countless times. The area is located within Pima County’s buffer zone, which encompasses the first mile of Saguaro National Park. The Buffer Overlay Zone Ordinance was established in the 1980s to transition the landscape from growing urban developments to open park space.

“For years, we would ride by that big piece of property right across the street,” she said. “As more and more houses got built on Old Spanish Trail, we really started to think that it would be a shame to see that property just turned into more houses.”

They purchased the 45-acre property in 2013 with the intent to build a cycling destination — the Bike Ranch.

Matthews said the buffer zone allows for guest ranches to be built under the technical category of a “minor resort,” but such a development still requires a conditional use permit from the Pima County Board of Supervisors.

Current plans for the Bike Ranch show 49 rooms, the maximum number a minor resort can have. The amenities would include a coffee bar and bike shop open to the public, a private restaurant and a training facility.

An environmental organization called “Save Our Buffer Zone” was formed to galvanize local residents against the Bike Ranch. The group has since renamed itself “Save Saguaro National Park.” Its leader, Dave Robertson, calls the Bike Ranch a “private profit center” that will prompt a domino effect.

“If this is approved, then [there are] no legal grounds for the county Board of Supervisors to say ‘no’ to any body else that wants to do any type of development,” he said. “If they go and put their resort in, they are in effect, destroying the very thing they are trying to protect.”

He said the Bike Ranch can’t be compared to other buffer-zone businesses, such as bed and breakfasts and care homes. The latter are practically invisible, he said.

“It’s the scale that she’s talking,” Robertson said. “She wants a restaurant, she wants a gymnasium, she wants retail. Retail. She wants bike rentals. If this goes through, all Old Spanish Trail is open for development. It will destroy the rural experience that all the bikers enjoy.”

Robertson, a professing bicyclist, lives a mile and a half from Saguaro National Park. He said his group consists of about 100 people, and many of them are neighbors of the Bike Ranch site.

Matthews said she first encountered the main opposition at a May 21 public hearing and was surprised at the number of people who spoke against the Bike Ranch. She said she went into the hearing largely unaware of the hostility.

“When we originally went to Saguaro [National] Park, they actually had very positive reaction to the concept, but they got so dumped on by the neighbors, who are just so up in arms,” she said. “It’s not a majority of people, but the neighbors who are up in arms are very organized, very politicized.”

Matthews said she and Lasher left the meeting dismayed by what she called an “anti-cycling” fervor.

“As cyclists, we were really upset by it,” Matthews said.

Labor of love vs. ‘greed, dude’

She said many of the horse-owning residents of the Saguaro community don’t like the idea of having more cyclists in the park. 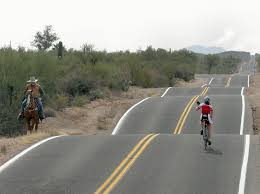 “I think a big part of the problem that we’re having is because it’s bicycles,” Matthews said. “I think if we had started and said, ‘Oh, we just want to build a facility with people who want to hike and go birding,’ I don’t think we’d be up against what we’re up against.”

But according to Robertson, the problem is not bicycles; it’s commercial development.

“This is greed, dude,” Robertson said. “This is all about greed, and we’re not here to satisfy their checkbook. And she [Matthews] says, ‘Oh, this is a labor of love,’ and we’re like, ‘You love yourself; you love your wallet. Don’t give me that.’”

Matthews has insisted that the restaurant will only be open to guests, and that her opponents have repeatedly mischaracterized her project.

She said the impact of the Bike Ranch’s extra services would be arbitrary compared to the supermajority of revenue would come from guests. She said only the idea of the Bike Ranch itself could have inspired her to press on through the “brutal process.”

“There are easier ways to make money on land in Tucson than trying to do this,” Matthews said.

problem with commercial development. The problem, she said, was scale. She said the county requested the Bike Ranch to cut its number of units in half.

“They came back with not only the same footprint, but then a seven-home housing development also,” she said. “They just doubled the amount of their development as opposed to halving it.”

A willingness to compromise is noticeably absent in the negotiations, according to both Sidles and Matthews.

“We’ve asked numerous times, can they downscale it, can they make a smaller development, and they say that’s as small as they can make it,” Sidles said. “It’s at a standstill right now.”

Matthews said the opposition has not tried to dialogue about the issue.

Robertson said he would have to talk to his group about compromise if Matthews eliminated the restaurant, while Matthews said she could “possibly see their point on the restaurant.”

“We’ve told them we’d be happy to meet with them in the future if they can come up with another alternative that might be more palatable,” Sidles said. “We’re not on either side. [There are] two extreme sides here. What I tell everybody is, our side is ‘protect the park’ side.”

Matthews and Lasher continue to keep their dream alive by educating neighbors on their plans, according to the Bike Ranch Facebook page. They also built a thorough website with plans and information about the proposal, where visitors can voice their support or concerns.